We dedicated the second day of our journey through Iceland to some places of interest in the so called Golden circle, the most touristic part of the country. First we went to one of the most famous and absolutely gorgeous waterfalls – Gullfoss. Be prepared for a lot of people – we arrived around 11:00 and the parking lot was already packed full of cars and busses.

So far (but with a tendency to change in the not so distant future) all major sites in Iceland, like waterfalls, glaciers, geysers, etc. have no admission fee. There is no waiting time and no entrance queues :-).

At Gullfoss waterfall there is a big visitors’ centre, with a gift shop, restaurant and café, and WC (you might want to use the one in the restaurant premises, and not the one outside, because there is a fee for the second, 200 ISK (a little less than 2 EUR).

You can see the waterfall in all its glory from above first, and take a look at the river it is formed from, the canyon through which it flows and the magnificent mountains in the far distance, as a background. After that you can go near the water, for a more first-hand experience, but be prepared to get wet. The water flow is so strong that when falling to the river bed it kind of evaporates back and if you stand at the edge you get soaked wet just like in heavy rainfall. It is a good idea to have a raincoat. And dress warm, because if the day isn’t sunny it can get really cold there.

After visiting one of the most gorgeous waterfalls in the country we went to the Geyser park. This is a place absolutely out of this world. The original geyser, the one which all the other such hot water natural fountains are named after, Geysir, is no longer active. It used to throw water up to 70 meters high. It still does that sometimes, very sporadically, and hasn’t done it in a while.

The majority of tourists gathers around the second biggest geyser in the park, Strokkur, which erupts every 5 to 10 minutes. The water from it can go from 15-20 to 40 meters high.

There are a lot of other, smaller geysers in the park. Take a stroll around them, make some pictures of the small round pools from which they erupt. The water colour is milky and sometimes turquoise. The whole area is magical.  But don’t touch the water because it is boiling hot, literally.

There is a steep hill which you can climb for a view of the geyser park from above. If you do that, don’t forget to look from the other side of the hill. Below it there is a gorgeous valley, with a river flowing through it, and small farms. The view from above is very beautiful and almost difficult to take in because of the scale. The houses and the river below look like toys, as if they are many kilometres away. 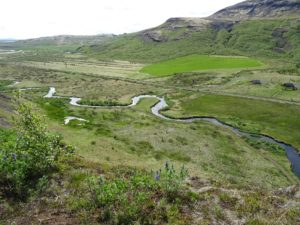 The Geyser park also has a visitors’ center, with a shop, restaurant, WC (free, big and clean :-)).

The next day, third in our road trip, was dedicated mainly to moving from the south-western part of the country to the northwest, or from the small and very charming town of Fludir, where we stayed the first two nights, to a very pleasant cottage near the town of Stykkishólmur. In it we stayed for only one night. The idea was to divide the long and tedious travel to the north in two. On our way in the northern direction we visited two waterfalls. They are located next to one another.

Hraunfossar is a group of small and absurdly beautiful waterfalls that come straight from a frozen lava field. They look like a lace of water. There are three wooden decks over the waterfalls and the river, and a high wooden bridge from where you can look at the water (and take pictures, of course).

Barnafoss is not very high or big but the water has magnificent colour and the rock formations through which the water flows are really beautiful.

There is a WC and a gift shop with restaurant at the waterfalls.

The cottage in which we stayed at the third night of our trip was the most charming wooden summer house ever! It is located “in the middle of nowhere”. It has windows on all four sides, each one showing a new and amazing view – to the wilderness of western Iceland, to the ocean, to the Western Fiords. 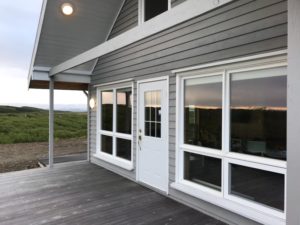 On the fourth day of our trip we were supposed to take the ferry and get ourselves to the West Fiords, the least densely populated part of Iceland, through a three-hour boat ride. But the ferry boat had an engine problem the previous day and our reservation was cancelled. The next day was to become one very long car ride from Stykkishólmur to Patreksfjörður where we were staying for the next 3 nights.

And what a ride it was! It was worth every single second of it! The road may be winding and very VERY steep at places but the views … Oh, the views! The road follows the edge of the “fingers” of the fiords and every minute gets you to a new view out of this world. Absurdly high hills, the greenest of green grass, waterfalls, faraway mountain tops covered in snow, horses and sheep living free on idyllic meadows and the ocean that encompasses it all. 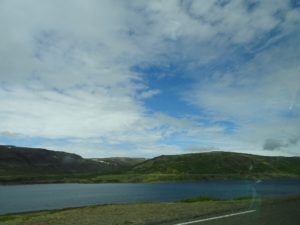 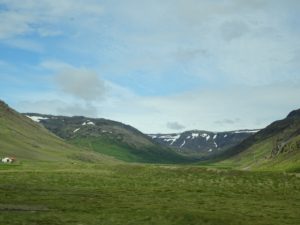 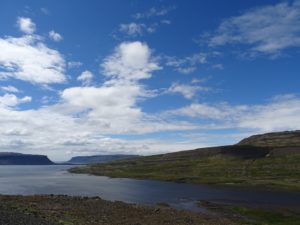 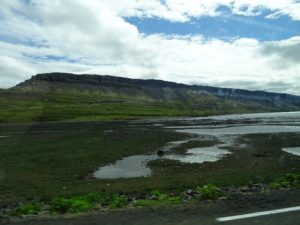 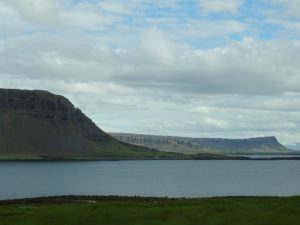 The weather was also on our side. I can only imagine what this ride could have been like if it was rainy or even foggy but we had the sunniest day in our journey so far.

We arrived at the town of Patreksfjordur around 18:00. The town is small but very beautiful. It is situated on the shores of the fiord. Although it is a small town it has a cinema, church, two supermarkets, café-restaurant with a terrace with magnificent ocean view and an open-air pool, also with a view towards the fiord. 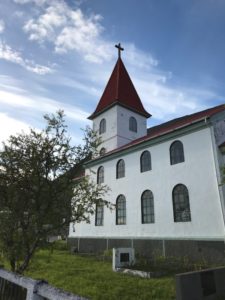 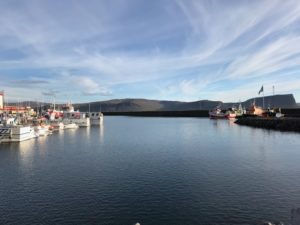